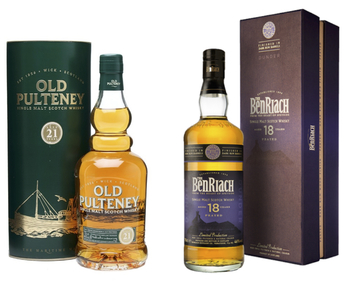 Two marvellous examples of whiskies to be poured this year:

Old Putney 21 year old
"Matured in ex-bourbon and ex-Oloroso sherry casks. Pours a bright amber with copper highlights; on the nose malt is up front, with spicy and fruity notes; unparalleled complexity is revealed on the palate, wrapped in an oily and unctuous mouthfeel; sweet, then nutty and spicy notes emerge; the finish is lengthy, with salted caramel and chocolate flavour lingering."

BenRaich Dunder 18 y.o. Pleated Rum Cask
This amazing Speyside whisky is a one-off bottling with only 1888 bottles to be available world wide! It takes its unusual name from the residue of cane juice left in a still after distilling a batch of Jamaican rum. As the yeast source in the rum fermentation it gives a unique aroma and flavour.
Dunder, at 46% vol, is distilled from peated malted barley, initially matured in American oak casks and finished in dark rum barrels.
It pours a summer harvest straw colour; on the nose, candied peel holds waves of soft peach and ripe banana dusted with Demerara sugar; delicately rounded peat smoke combines with gentle sweet oak spices. On the palate dramatic peat smoke and barley complement crisp citrus zest, white pepper and fresh ginger; caramelised orchard fruits and dried apricots develop to a rich grassy wood smoke finish.
​
Whisky lovers have all found their own path to the enjoyment of this ancient and beloved tipple. In my case it was a tortuous path made difficult by an unfortunate incident, one shared by many I’m sure, back in the days of my youth. In 1965, when I was a stripling of 19, one of my high schools chums had won a bottle, a 26er as we referred to them in pre metric days, of Johnnie Walker Red Label in a office Christmas party draw. At the time he was bereft with  difficulties with his girlfriend, (they have been happily married more than a half century since) and I was at loose ends. Christmas Eve  was the night we decided to try this whisky stuff. He at the time owned an old, non functioning Jaguar, and we decided that sitting in the unheated Jag in an unheated  garage was a perfect place to drink on a cold winter’s eve. We had no water, or glassware, so we were limited to drinking our first whisky directly from the bottle. The evening flew by and by the time the bottle was gone we were too.

Christmas day was long. Christmas turkey tasted as if it were basted in whisky. Christmas 1965 was the last time whisky passed my lips for 15 years or so. Thereafter I approached the stuff warily, with respect, and trepidation. Gagging was part of my reintroduction at the age of thirty-five. But slowly, ever so slowly the taste was reacquired. Now at the age of seventy, I drink only small drams, with a bit of water. Sipped and savoured and warmed by hand. Whisky is now like an old friend, always a pleasure to visit with.